The Groomers Helper®, was originally inspired by the AlphaLock, which was invented and developed by Dr. Anderson and AlphaM Inc. for use in conjunction with the Gentle Leader Training Halter. Chuck Simons of The Pet Salon Inc. adapted the AlphaLock to work with grooming loops and other modifications and invented the Groomers Helper® Pet Safety and Positioning System.

Chuck found AlphaLocks to be great time savers and wanted to bring them to the Grooming Industry. In December of 2000 he bought the entire stock of AlphaLocks in existence along with the exclusive rights to manufacture them. 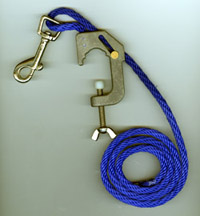 Chuck asked his staff at his own Grooming Salon to rename the Alpha Lock and they came up with the name “Groomers Helper,” because their groomers did not need another person to assist them any more. The Groomers Helper® did the same job. “It was like having an extra pair of hands.”